Jasmine Williams debut CD "New Beginning" is ready to take the world by storm. Her new album New Beginning, for which she is the

singer, songwriter, and producer, is an album for the masses. New Beginning was
created during a time of recovery for her personally and was begun while she was
wheelchair bound with a leg injury. As she began to recover over the next twelve
months, she penned many songs, eight of which are on her new CD. Driving along
in her car one day, she began humming lyrics, creating a new song as she often does, when the title “leaped out” at her: “New Beginning.” It became the title for both the CD
and the song. After that breakthrough, everything else evolved naturally. Other
titles include “Crazy,” written to promote and encourage people to love Jesus
more than anything else – “…school, cars, money – nothing should excite us more than our love for Jesus.” The song entitled “Dreamer” was written to inspire others to dream and live life. Of it, Jasmine says: “Sometimes we find ourselves having to put
our dreams and visions on hold. But never let your dream die. Never give up on
yourself! Even if others don’t believe in you, believe in yourself and dream.”
Her song, “He Will Deliver You” is a song with a message to give people
encouragement even “…if you are caught up in or bound by unhealthy
relationships, drugs, sickness, depression, anger, or poverty. No matter how many times you have messed up, as long as you have life, faith, and a repentant heart, you can
have a New Beginning.” Finally, Jasmine wants people to remember that we will
always have good days and bad days; everything will not always go the way we
want it to go. And she especially wants young people to be mindful that
“…weeping may endure for a night, but joy comes in the morning.” No matter where
you find yourself, “…say Good Morning to your situation.” And you will have a
NEW BEGINNING

"No matter how many times you have messed up, as long as you have life, faith, and a repentant heart, you can have a New Beginning.”- Jasmine Williams

Listed below are Jasmine's projects and other projects in which she is featured: 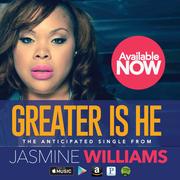